SEO Do’s and Don’ts for Relaunching Your Site

So you’ve realized that it’s time to update the old website, have you? That’s great! If your site has technical issues, you’re rebranding or if it just looks boring or dated, a relaunch can be the best thing for your brand – or it can tank your site faster than anything if you screw it up.

So don’t screw it up!

There have been countless articles written on how to complete a successful site relaunch by people far more technical than myself so I won’t go over that again and instead I’ll give you a quick list of Do’s and Don’ts to help you along the way.

1. Do tell your SEO and/or Digital Marketing team far in advance of any relaunch.

This is so simple, you’d think people wouldn’t need to be told this but I can’t even count the number of times we’d have a client meeting and they’d say ‘Well, we’re sort of thinking about relaunching the site but we’re not sure.’ and then get another call three days later saying ‘we relaunched! Can you take a look?’

Don’t do this. This is just awful because there is a lot of planning that needs to go into controlling the inevitable damage to your organic traffic that a relaunch is sure to cause. If you don’t tell anyone on your SEO or DM team the exact details of when you’re going to relaunch the site, we don’t have a chance to give you the advice you need to make sure you’re going in the right direction – and also that you didn’t forget anything crucial during your relaunch plans that you’re just going to have to go back in and fix later.

2. Do Expect to Lose Organic Traffic After the Relaunch

This is one of the most important things that your entire company needs to understand from the CEO all the way down:

AFTER A RELAUNCH, YOU WILL LOSE ORGANIC TRAFFIC.

It just makes sense if you think about it. You just went in there and fundamentally changed your entire site. You probably messed with your URLs, which caused you to lose some ‘link juice’ (I hate that phrase) and probably caused some broken external backlinks out there. Google needs time to get back out to your site and crawl your new site to even get you indexed. They also need time to see how searchers are responding to your new site (eg: bounce rates, time on page, etc.) to know how relevant to queries you are and to which ones.

I’ve never seen any site, from huge corporate brands to small mom and pop sites, not lose traffic immediately after a relaunch so this is just a fact. What you want to see is how quickly you recover (and IF you recover!) and where your traffic goes from there.

3. Do Have Your Meta & Structured Data Tested Before Going Live

Here I mean just a simple check on Screaming Frog and the Search Console Structured Data tool to make sure all your Meta Titles and Descriptions are unique and in place and that your Schema/JSON-LD structured data is working properly and fixing errors as needed.

Nothing is more annoying than doing what you thought was a complete successful relaunch and then finding out that you have to go back in to fix all your meta data and schema – or that you FORGOT to put it there in the first place.

4. Do Have Your 301 Redirects Planned in Advance

This is also something that you should have considered long before you even started the actual relaunch process but you’d be surprised how many people either don’t do this or only do this halfway.

If you made changes to your URL structure or your Top Level Navigation or any other aspect that will effect your URLs, MAKE SURE YOU HAVE YOUR 301 REDIRECTS IN PLACE BEFORE YOU LAUNCH. 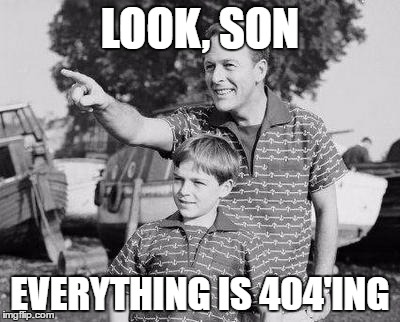 If you relaunch and you have a bunch of pages 404ing or if you now have a bunch of backlinks to your site that are 404’ing because you didn’t 301 the old URLs to the new ones, that is going to hit your rankings like a truck. What’s more, though, it’s just bad user experience.

Get your 301 redirects in place before you go live and then spot check them to make sure they’re in place. If you don’t know how to create a 301 redirect map, check out this resource from Sistrix.

1. Do Tell Your SEO and/or Digital Marketing Team to Audit Your New Site

Simple. Just have them do a tech and content audit to make sure everything is in place or if something is broken that the Web Dev team might have not even thought about. Remember, your Web Development, UX and Digital Marketing teams all have different priorities so it’s a good idea to get feedback from all of them to make sure you haven’t overlooked anything.

1. Don’t Just Relaunch the Site Without Saying a Word to Anyone on Your DM Team 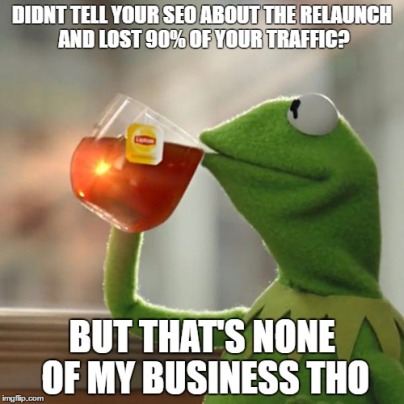 Oh, man…just don’t do this. It only takes a simple phone call or email to tell the people on your digital marketing team about the relaunch and it can save you a lot of headaches down the road. I’ve seen too many times the problems that could have been avoided if someone had just told us that they were going to relaunch the site before they did it instead of having to correct a bunch of problems that didn’t have to occur.

2. Don’t Relaunch your Site near the Holiday Season or a Busy Time of Year

As we discussed previously, any relaunch is going to make your site lose a certain amount of traffic, it’s just a question of how much. If you do this during the holiday season (from late October to mid January), you’re basically asking for trouble.

Best case scenario, you don’t have any serious SEO errors with the relaunch and you put your 301s in place: Google will still need to come out and crawl your site, figure out what it is you do and what the changes are and how people are reacting to your new site. You’ll still lose some traffic for a while during your busy time of year.

Worst case scenario, you didn’t get your 301’s in place, there’s something wrong with your Robots.txt or structured data or other issues: You basically just tanked your site during your busy time of year.

3. Don’t Relaunch Your Site on a Friday

This is just common sense and I don’t understand the businesses that do this.

Why would you do a complete overhaul on your site and then tell everyone that could fix anything that may go wrong ‘OK, see you in two days!’?

That makes no sense to me. Just don’t do this.

Pop-Ups, Pop-Unders, Interstitials, Email Marketing Sign Up forms…there’s about five million things you can put on your site as soon as it loads and guess what:

All of them use code that can slow your page down, are probably really annoying to your customers causing them to leave your site and, in some cases, can get you penalized by Google.

Listen to your customers, listen to your UX team and listen to Google. Don’t bog your page down with widgets you probably don’t need and a bunch of junk code. Pagespeed is a part of SEO. User actions on your site are a part of SEO. Make the site functional, fast and above all, user friendly.

This is a step that is sometimes overlooked. Make sure you are actually tracking the changes to the KPIs that matter to your business and comparing how these are changing after the relaunch.

Of course, as we discussed previously, you will lose traffic for the first few months but you need to still keep an eye on how long the recovery takes, what happens to your traffic and conversions after recovery or if you even recover at all.

A successful Site Relaunch takes a lot of work and the old saying holds true about failing to plan being planning to fail. If you follow a good plan and get your Web Development, UX and Digital Marketing teams involved and working with each other, you have a far greater chance of success.

Also don’t relaunch on a Friday.