They Rank Higher Than You? Who Cares? – Part 2

So last week we discussed all the reasons why I pay almost zero attention to ‘Competitive SEO’ and why you probably shouldn’t either. If you missed that one, I recommend you read the first part of this blog series before continuing on. I’ll wait.

Let’s move on and talk about what you should be looking at instead and what metrics really matter. Before we do that however, we need to clear something up right here and now.

There are No ‘Tricks’ in White Hat SEO

Most of the time, the root cause of this unhealthy obsession with competition reports is this:

They see someone else rank higher than them for a certain keyword or phrase search that they think they should rank number one all over the world for. Because of this, they think that there must be some kind of ‘tricks’ the other guy is using that they want in on.

They see all these sites from fly-by-night companies guaranteeing ‘Double traffic in 24 hours!’ and ‘Rank #1 on all your keywords!” and they think ‘yeah! That’s quality SEO there!’ and then they hire a reputable SEO company, wait two days, see their traffic is still in the toilet and assume that it’s the SEO’s fault and need someone to yell at.

Everyone needs to understand something and get it through their heads once and for all.

You know what, this is a whole blog topic on its own that I’ll probably do next week, but for now, just understand that regardless of what someone trying to get your money is telling you, no one can guarantee you’re going to rank for anything regardless of what you do. They are either lying to your face or they plan on either buying you a bunch of spammy backlinks that will get you penalized in a month or sending you a bunch of useless traffic from overseas or bots (or both) that will never convert. Either way, you just wasted your money.

Also, keep in mind that SEO is not PPC. It’s not a ‘I’ll just tweak the spend a little here and add an extension there and I’ll increase by tomorrow!”. It doesn’t work like that.

That being said, let’s move on and talk about how to tell if your SEO strategy is working.

What Are Your Specific SEO Goals?

It’s a very simple question that a shocking amount of people who sign up for SEO services don’t have a clear answer to.

“To be number one on Google!” isn’t an answer. There’s no such thing.

“To rank first on all my keywords across the country!” isn’t an answer. Most likely can’t be done.

“Quadruple all my conversions!” isn’t an answer for SEO…or CRO with a goal like that.

“Lower my PPC spend!” isn’t an answer. Yes, it can happen but there are too many other PPC factors.

Also, being realistic is crucial.

If you just opened your doors yesterday or you’re a small business that has no national branding and your goal is to ‘beat Amazon for T-Shirts!’…well, you’re going to be sorely disappointed.

Sit down with people who know what they’re talking about, whether internally or through a reputable consultancy, and talk about your business and your goals. Don’t surround yourself with people or companies that just tell you what you want to hear and don’t just assume you can ‘do SEO’ and suddenly win the internet. It doesn’t work like that.

Where Are You Now?

You’d think something so simple and basic shouldn’t even have to be said but you’d be wrong. About 80% of the people that I’ve dealt with in SEO have literally no idea what their organic traffic looks like. Some of them can tell me down to the last miniscule detail about their PPC traffic but organic is an afterthought because, well, its ‘free’, right?

This is a huge deal for business owners because how can you know where you’re going if you don’t know where you are? I once talked to a guy that thought he had almost no organic traffic and after about ten seconds in his Google Analytics account, I found out that organic was his second most popular channel.

On the flipside of that, we’ve had people come to us thinking organic was their money maker and that their PPC campaigns were failing and it turns out it was the exact opposite.

The point is that they had no idea.

Look, this isn’t the mid-90s anymore. You can’t just ‘buy your turnkey business now!’ and ‘make money while you sleep!’

There are too many eCommerce sites out there now selling exactly what you sell. You or someone that works for you needs to know where you stand on your different channels at all times. Don’t get caught up in competition, instead know what you have coming in and where it’s from.

Don’t worry about who’s ‘eating your lunch’ when you don’t know what you have in your own kitchen.

Make your Site Not Terrible: Do the Work

Don’t forget that there’s actual work involved here. First you have to figure out what’s wrong with your site and then you have to actually fix it.

I work mostly in a consultancy role, meaning that I identify your site’s problems and give you a clear plan on how you can go about fixing it and I’m there to help you on the way but I don’t actually get in there and fix your code and write your blog articles or things like that. This is made abundantly clear before anyone signs anything and yet the following always seems to happen:

I’ll bring the results of an audit to someone and identify all sorts of problems that need fixed and how to do it and then the client just ends up going, “Yup. Those are real problems, all right. Well, we don’t have any dev hours/content writers/manpower to actually fix this right now but thanks, though!” and then people sort of just wander off into the ether.

About a month later this happens:

“How come I’m not ranking?”

“Did you do the things on that list I gave you?”

Google doesn’t don’t care how much you paid a consultant and no consultant can “make you rank”. Someone’s gotta do the work. 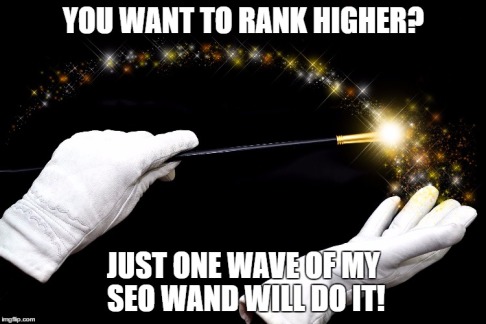 If your site takes five hours to load because it’s bogged down with junk code, you have pages 404’ing all over the place, you have useless, keyword stuffed or manufacturer’s content on your site or other serious issues, the best SEO plans in the world aren’t going to help you and neither is all the ‘competitive reporting’ in the world.

If you outsource your SEO to a third party company, make sure that you hire the right kind of company. Meaning, if you want advice and strategy planning or just someone to help you get started moving in the right direction, go with a consultancy. If you want someone else to do the actual grunt work for you, meaning going out and getting backlinks, writing your content, fixing your page speed, etc, don’t hire a consultancy.

Know what you’re paying BEFORE you pay for it and real talk: don’t always trust salespeople. You should know this by now but a lot of times, sales doesn’t know what SEO does all day. Make sure you get an actual SEO rep on the phone and talk to them. Ask them what they do and don’t do. If they’re a reputable firm, they’ll have no problem telling you.

But My Keyword Reports!!

Ok. Look, Keywords reports are basically pointless. They’re a vanity metric that has almost no value in 2017. With the advent of personalized search, local area search and other factors, there is pretty much no standard ‘page one of Google’ that everyone sees anymore.

The only thing I like using keyword reports for is to see how my content marketing is doing. I basically track certain keyword groups and ideas and then I do a baseline of where a client is right now for those terms and then we launch their content strategy. I’ll run them about every week or so just to sort of see if we’re getting any traction at all off of the content. There are better ways to track this sort of thing but if you want to still use Keyword Reports in 2017, this is the best way I can think of unless you focus on local search.

I get it, competition is a thing, “lunches get eaten” and whatnot.  Yes, you need to keep an eye on what’s going on around you at all times but in reality, your own business and your own progress should be your main concern.

Set realistic goals specific to helping your own business grow, spend more time watching your own traffic stats and less time worrying about what Bob down the street is doing. Get in there and do the work to see the results and that’s how you’ll know if your SEO and overall digital marketing strategy is paying off. You won’t find that in a competition report.