OK, so it’s near the end of year and you know what that means, everyone. It’s time for literally everyone who has ever seen a website, looked at Google Analytics for five minutes or knows that there are actual factors that go into search results and it’s not just all Google Voodoo (it really is, though) to start making predictions about the upcoming year in search!

Yeah, this article is yet another in the long line that have come before and are sure to come after. Why should you read this one? Why not? You’re already here and it’ll be pretty good. Also, basically all these articles are the same so if you read this one, you don’t have to keep looking everywhere else for these answers.

I’ll be pretty quick because none of this will be anything new if you’re at all familiar with search marketing.

So without further ado, here are my predictions for what’s next in Local and Organic SEO in 2017.

Look, if you’ve made it this far as a website owner, an SEO or even an internet user without realizing that everything from Social Media to eCommerce sites and everything in between is going to need to be optimized for mobile search then I don’t know what to tell you.

Everything is going mobile first and with the Google index split that is on the horizon, making sure your site is mobile ready (with responsive design being the ideal, just in case you’re one of those ‘clever’ types that decides it’s a great idea to hack off 80% of your on page content for your m. version) is just not an option anymore.

Yes, Google says that if you don’t have a mobile version of your site not to worry but come on, you don’t have to be a wizard to see where this is going.

All signs point to mobile first and more importantly, people are searching more on mobile than desktop. If your site is a mess, they’re going to your competitors. Look, at this point in the game, this shouldn’t even be a thing we still need to talk about. Just do yourself a favor and get your mobile site together.

Yes, that’s right. No matter how much you don’t want to do it (I’m looking at you, eCommerce shop owners), content will still matter. In fact, it will probably matter more than ever with the inevitable growth of Rankbrain and Panda being ‘baked in’ to the algorithm now.

Ten thousand product pages with copied manufacturer’s content ain’t it. Two sentences you decided to randomly type on a page loaded with pictures you didn’t make alt tags for ain’t it. You need – let’s say it all together, now – Good. Unique. Content. Give the people and search engines what they want.

If you can’t write, then contract out to someone who can. If you don’t have time to write or the desire to contract out, you won’t rank.

If you think you can avoid all this by doing AdWords and just throwing money at the problem…well, I guess you could but your spend will be completely out of this world if your competition is making good content. Have you seen your relevancy score lately? Save yourself some time and money and just write decent content.

Social Media Will Matter Even More..and Get Ready To Pay for It

Next on the list of ‘this is literally the same thing every year’ is the importance of Social Media and SEO.

Ok, so we know that Google doesn’t look at social signals but if you don’t see a correlation (or causation, perhaps…) between an increase in your Social Media Traffic and your Organic traffic, either you haven’t been looking hard enough or you refuse to believe it. I’ve done experiments on this for clients so often with the same results that I just can’t believe that social media has nothing to do with your organic results whether directly or indirectly.

Really, it doesn’t matter why it works, just know that it does work – which is pretty much how SEO in general works now, anyway. Do your paid social media ads, boost your ‘unicorns’ as Larry Kim would say and engage with your fans and followers. Hold ‘like & share’ contests, cross-promote your content and everything else that you’ve heard a million times before.  Social media is not going away and if you haven’t figured it out by now, organic social media for businesses is not a thing you can do with any modicum of success anymore.

PAY. FOR. YOUR. SOCIAL. Well, that is unless you like talking to yourself online.

The Local Pack? Who Even Knows

There have been some changes in the local packs recently that you may have heard about and probably don’t like. Of course, I’m talking about paid results showing up in the pack. I don’t like it, you don’t like it, nobody likes it. That being said, I understand it. Google wants that money. How else will they fund their self-driving cars and bubble cities and whatnot?

The reason why I’m uncertain about the future of the organic (unpaid) local packs is because to me, and I have no evidence of this except how it looks to me, is that they’re phasing this out…sort of.

Why do I say that? Well, think about it. Back in the day, it used to be a seven pack. Then a five pack. Then an organic three pack. Now it’s an organic two pack with an ad thrown in. For some queries you just get a wall of straight up ads that Google likes. Honestly, who even knows what’s going on with the local packs. 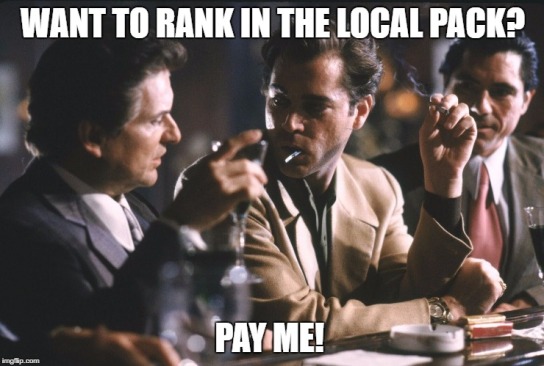 While I doubt they’re all going to go away or go completely paid, you still never know. What I do know is that with the dwindling unpaid real estate in those packs that means you better make sure if you have a local business that it’s as locally optimized as it can be because that competition is going to be fierce.

Well, it had to happen one day, didn’t it? The machines have taken over so you’d better just get on the train before you’re left behind. Of course, I’m talking about Artificial Intelligence and machine learning.

Let’s not even talk about RankBrain for a minute and just go with the others. We have Amazon Echo doing local search, Google Home, Google Now, Cortana, Siri and the others out there all ready to answer search questions on command. You need to know how to rank there too, and guess what, on that platform it’s number one or nothing.

There are a lot of tips on how to rank for these devices that you need to start paying attention to if you haven’t already so now, let’s move on. Let’s talk about your friend and mine, SkyNet itself, the machine so complex even Google doesn’t know how it works and they built the thing: RankBrain.

There is so much information out there about RankBrain, I’m not even going to beat the dead horse about how to be relevant and increase your engagement and all that, so let’s just get down to it. RankBrain is now the third highest ranking factor. Some people said it will make SEO irrelevant because you can’t optimize for Rankbrain. Some people are funny.

I’ve said it before and I’ll say it again, just because you can’t do ‘A, B and C to make sure RankBrain loves you’, that doesn’t mean you can’t optimize for it.  RankBrain is about relevancy and engagement signals – two things you CAN optimize for. How? Create relevant, helpful and uniquely valuable content that people will want to engage with. Fix all of your technical bugs to make sure your page doesn’t take three hours to load. Clean your UX to make sure once your page does load it doesn’t make people run away screaming.

Basically, if you want to optimize for RankBrain just optimize your site and the rest will follow.

Backlinks Will Still Be Crucial. Ugh.

Backlinks. They’re tricky. They’re dangerous if done poorly (or if someone just thinks they’re done poorly) and they’re the most heavily regulated aspect of SEO that I can think of at the moment.  I personally hate them but I understand why they’re needed. With Penguin 4.0, the penalties for bad backlinks aren’t site-wide as they once were but they still exist but that’s not my problem with them.

My problem with backlinks is this: Nobody wants to go around begging for a link and ever since people figured out how important they are nobody worth getting a link from is just giving them away. Don’t believe me? Go to a blogger with any level of domain authority and see what links are on there and then try to get one for yourself. I’ll wait.

Oh? You say you got one? You had to email them like 6 times, though? Well, persistence has paid off!

Now that page they linked to on your site is kind of demoted or penalized because asking for one really isn’t ‘natural’ and Google doesn’t know what you might have given them in return for this link and the blogger forgot to put a ‘nofollow’ on it (which sort of misses the point and most of the value of getting the link in the first place) and apparently it could be unnatural.

Yeah, all the work you put in to get that link? Just go ahead and disavow that, now. Sorry. 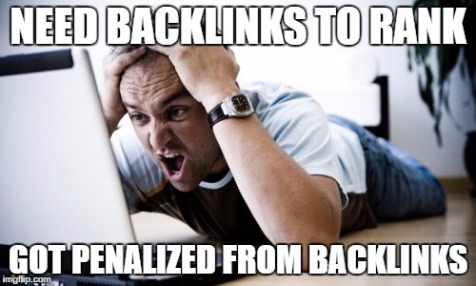 Anyway, backlinks aren’t going anywhere so we might as well get used to it. The only thing they might be replaced with are social shares and you know Facebook and Google aren’t going to just start swappin’ data any time soon.

So yeah…get your good, natural and authoritative backlinks. By any means necessary. Except by doing things. Because that will get you penalized.

Just write and promote content and hope for the best.

Zero is the New One

Position zero. All the cool kids are talking about it and everybody wants it. With the advent of voice search and the like, if you can get featured in the rich snippets, you’ve made it. They’ve been shown to boost CTR and engagement and obviously stand out on the Search Result Pages. I have a feeling that going forward, this is where everyone is going to want to be so make sure your content is quality and your structured data is on point.

We’ve already talked about the rise of voice searches like the Amazon Echo and the Google Home so I won’t beat the dead horse by mentioning them again here but I only see this getting bigger in 2017 and beyond.

That’s It? That’s All You Got?

Well, not really but I’ll stop here so this doesn’t become a completely overloaded nightmare. There are subjects I didn’t even touch on like Maps SEO, Technical SEO or optimizing for other search engines like Bing or Yahoo(lol).

The big ‘G’ is king this year and it probably will continue to be unless something extremely drastic happens and if it does, I’ll be back with that information as well so just enjoy these predictions for now and get your site ready for 2017.

Or I can be like everyone else every single year since like 2010 and say ‘This is the year SEO is dead!’ but whatever, either way.